This video is about a woman who got out of an abusive relationship.  The video documents the story of what it looks like for the woman now that she is in a new relationship.  While I am not in a new relationship, it does show really well what happens to me when I am around men in general, especially in the scenes where she is expressing her opinion about something and he doesn't like it so he pushes her.

I am scared to express my opinion around a man because I fear he will turn violent.

I feel scared when standing close to a man because I fear he will hurt me.  That is why I always take a step away.  Some days I have the courage to stay put, but even when I do I am still frozen on the inside.

I am terrified when there is a man standing behind me because I fear being violated. There are two main situations that contribute to this:

1. The first time I was assaulted at thirteen years old.  I was standing in the cafeteria at school and my abuser walked up behind me and began to touch me inappropriately.

2. The first time I was punched by my ex-husband.  It happened two weeks after our wedding.  I had just gotten out of the shower and I was sitting at the kitchen table with a towel on my head. I was facing the wall and he was standing behind me.  I don't know what the conversation was about, but he didn't like what I said and he punched me in the back of the head.  I couldn't even see it coming. 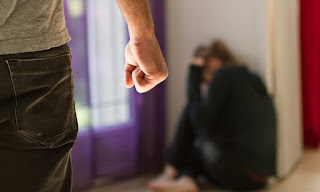 Cognitively, I know that I am transferring the fear of what other men have done to me on to the men in my current life.  I know that is not fair and I am genuinely sorry.   With counselling, Celebrate Recovery, and some healthy friendships, I am constantly growing and experiencing some freedom.

I don't know if I will be broken like this for the rest of my life.